Bavarian Potato Salad is a tangy vinegar based warm potato salad. It’s lighter than the mayonnaise version and is perfect served alongside any German food like bratwurst and sauerkraut!

When we’re having an off day in the field during harvest, I know it’s time to whip out the German style potato salad. It’s full of warm potatoes, it’s hearty and it’s an easy side dish.

It also tends to put a smile on the faces of the farmers I’m feeding.

Is it because German potato salads are served warm??? Do they love potato salad because it has bacon?

It’s hard to tell, but it works, so I keep making it because we all like to eat potato salad!

This post was originally published in October 2019. It was updated in May 2021 for enhanced directions and better photos.

What is Bavarian potato salad

Here in the Midwest we have many ways of making potato salad and they’re all my favorites for different reasons. This is an easy and authentic German potato salad is made with onion, apple cider vinegar, bacon and cooked potatoes.

I like to use apple cider vinegar in my potato salad for some added tang but you can use white vinegar or white wine vinegar if you prefer.

Now, I’m not sure what kind of potatoes they use back in the ‘ole motherland in Germany, but my potato of choice for this side dish is Yukon Gold potatoes.

I love that they’re thin skinned, they hold their shape, and you don’t have to peel them before cooking. If they’re small yukon gold potatoes, the dicing is even easier!

If you want to up the flavor game you can cook the potatoes in vegetable broth or beef broth instead of water. It’s totally up to you.

This recipe doesn’t need vegetable oil or any other fat because the bacon does double duty, standing in for flavor and fat.

Y’all know I love using ingredients that can be found in any grocery store. And this recipe follows that rule! Here’s what we need:

How to make Bavarian Potato Salad

I have two methods for making this old fashioned potato salad.

You can boil the potatoes on the stovetop or you can cook them in your Instant Pot.

To cook the potatoes on the stovetop:

Wash and scrub potatoes. Cut potatoes into bite size chunks. Why chunks? They’ll shrink as they cook so don’t worry about making them perfect.

Fill a large pot with cold water to cover the potatoes.

Bring to a boil, and then reduce temperature to cook over medium heat. Simmer until potatoes are fork tender, about 5 to 8 minutes depending on their size. Drain and allow to cool slightly.

To cook the potatoes in the Instant Pot:

Prep the potatoes as outlined above. Don’t worry, instructions are in the recipe card below, too!

Add a steamer basket into the Instant Pot. Add 1 cup of water and the potatoes. Lock lid in place, and pressure cook for 15 minutes.

Do a natural pressure release for 5 minutes, then a quick release and drain the potatoes.

To make the vinegar dressing:

In a large skillet or in your Instant Pot, fry the bacon until crisp, remove and set aside to drain on a paper towel.

Farm Girl Tip: You can also make bacon ahead of time and freeze it!

Drain all but 2 tablespoons of the bacon drippings. Add onion to the pan with the drippings and cook until tender.

Add vinegar and water, cook until bubbly and slightly reduced. Add sugar, salt and pepper and stir to dissolve. Remove from heat.

Place cut potatoes in a large bowl. Pour warm dressing over the potatoes and bacon and parsley and stir to combine.

Tip: Allow the potatoes to cool for 15-20 minutes before adding the dressing and stirring. If the potatoes are too hot, you’ll end up with mashed potatoes!

How long does Bavarian style potato salad last in the refrigerator?

Not long, in our household! But this potato salad will keep for several days in the fridge.

The bold and bright tastes of this German style potato salad really shine through when this potato salad is served warm or at room temperature.

If refrigerated, remove about 30 minutes before serving to allow the salad to lose the chill factor.

If you prefer a cold German potato salad, you can do that, too!

If you make this warm German potato salad, leave a recipe review or comment below. I’d love to hear from you!

Bavarian Potato Salad is a tangy vinegar based potato salad. It's lighter than the mayonnaise version and is perfect served alongside any German food like bratwurst and sauerkraut!

TO COOK THE POTATOES ON THE STOVETOP

TO COOK THE POTATOES IN THE INSTANT POT

TO MAKE THE DRESSING

This potato salad is served warm or at room temperature.

Store leftovers in an airtight container in the refrigerator.

If refrigerated, remove before serving to allow the salad to lose the chill factor.

It will keep for several days in the fridge, if it's around that long!

This tastes just as good or better the next day.

DID YOU MAKE THIS RECIPE?

I’d love to say I have a super posed, fancy photo but here’s what we have. #reallife

This batch is on its way out to the field!

What to Serve with Chicken Cordon Bleu - Cook Eat Go

[…] many ways to change up your potato salad to go with your meal. If you don’t want a cold salad, a german potato salad goes well with chicken cordon bleu, […]

What To Serve With Chicken Pot Pie - Cook Eat Go

[…] a fall dish combines both worlds in an amazing way!  You can do classic potato salad or even a german potato salad as well, though loaded potato salad is my family’s […]

Germans do not all make warm potato salad as it depends on the area from which you come. Germany is as versatile with there potato salad as Americans. In Germany there are over 500 different varieties.

You had me at bacon - yum! Potatoes and bacon are perfect together.

This is such a delicious potato salad! Love the addition of the apple cider vinegar -- really adds some tang and brightens up the potatoes!

How I Finally Came Home

Welcome to This Farm Girl Cooks, my name is Deanne Frieders! This is the place I LOVE sharing recipes and ideas with busy home cooks.

My focus is on simple, delicious meals your family will actually eat!
A little about me… 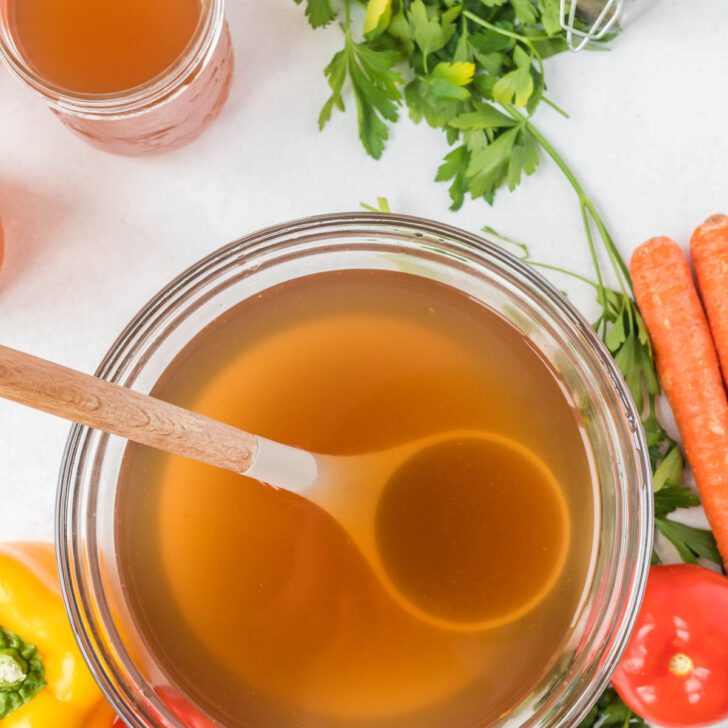 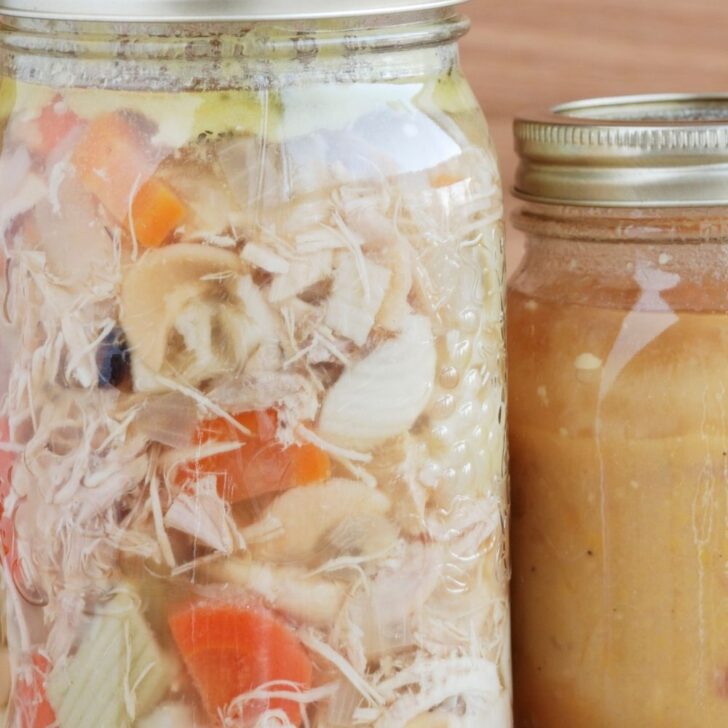 How to Freeze Soup in Mason Jars 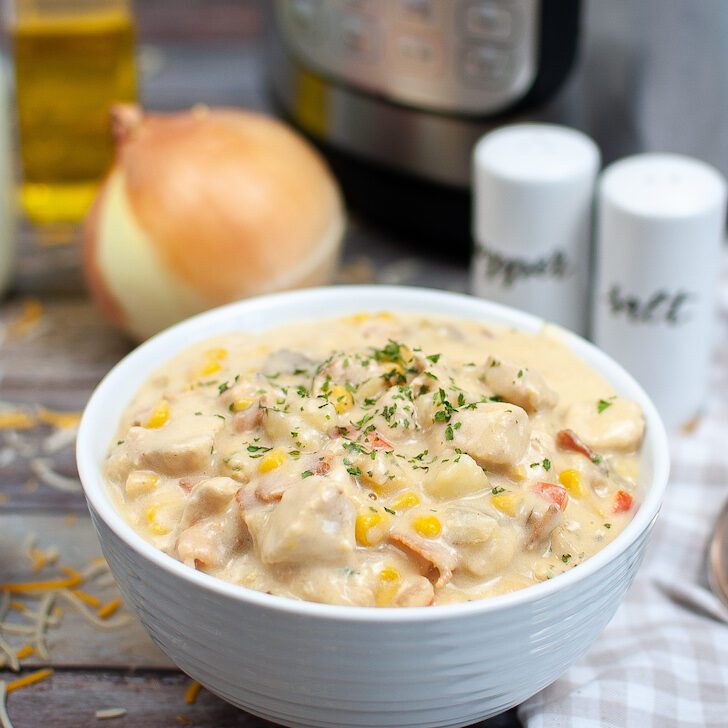 About The Author: Even though on the go meals are now Deanne's specialty, she didn't take a direct path to get there! Go here to read her story,"How I Finally Came Home". You can see Deanne's "Table to Tailgate Cookbook and custom recipe cards here".