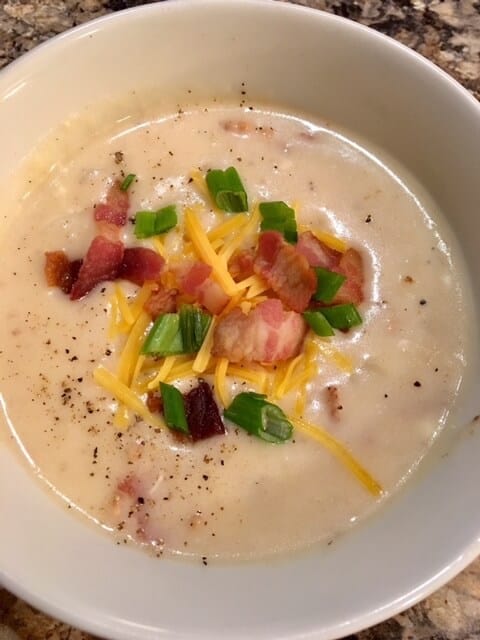 Happy New Year! Let me tell you, we are kicking the year off right by making a batch of Creamy Potato Soup! I think it’s an easy to make, ever so slightly healthier version of a restaurant style soup (yes, there’s bacon and cheese and stuff – I can’t help myself.)  But seriously, just a few ingredients, 45 minutes, and you’ll be eating this by the spoonful, like our little guy Luke. Our snow is almost completely melted here in Northern Illinois. It’s weird for January and sad for snow play, but good for a New Years Day walk around the farm. Also, it’s still cold enough that soup is on our weekly rotation. Now, I’m going to let you in on a few secrets…

There are fancier versions out there – I know there are because I’ve made them before. They’re really good. But here’s one well known fact about me – I don’t like to wash extra dishes if I don’t have to. I avoid it at all costs. We already go through a million dishes a day in our family of six.

That’s why I made this recipe in one pot without the whole blender deal like you may have seen in other recipes. I’ve been there, tried that, and then I had to go wash a pot AND a blender. Problems, problems…

Also, use store bought diced hash brown potatoes. You don’t even have to wash a potato peeler, and they get super soft and creamy and wonderful. #winning

My other secret is this….cook the bacon in the pot before you start the soup. Yes, you save a dish. Yes, you add awesome bacon flavor. Yes, you add a little more fat. But if you use center cut bacon, it won’t be a crazy amount. I promise. And you don’t have to wash a pan cooking the bacon. Can you see where my head is in 2017? It’s all about less dishes. 🙂

Okay, enough secret sharing. Here’s my recipe. Try it and let me know what you think. Happy New Year, and here’s to more easy cooking!!

Love this recipe?Follow me on Pinterest at @ifeedfarmers or save this recipe for later by using the Pin button at the top of this recipe!
By Deanne Frieders
0

Welcome! I'm Deanne Frieders and I’m a wife, mom of four, and farmer in the making. We live in a rural area located in DeKalb County, Illinois. I absolutely LOVE teaching busy home cooks and people on the go how to make simple, delicious meals your family will actually eat! 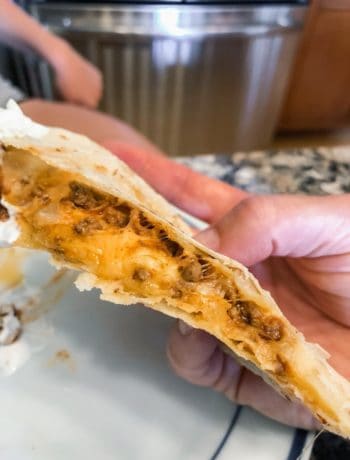 Why Taco Quesadillas Are the Answer to All Life’s Problems 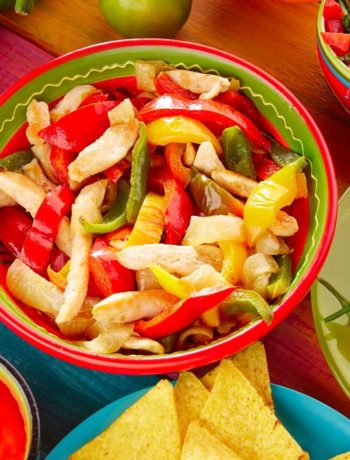 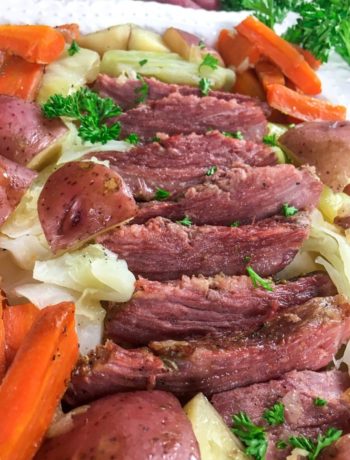 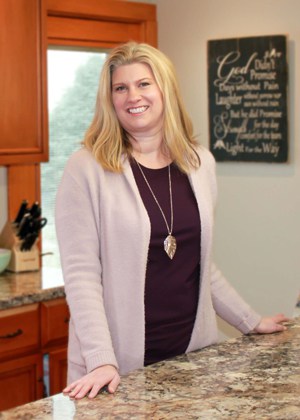 Welcome, I'm Deanne, wife to a farmer and mom to four kiddos. Follow along as I share delicious, family friendly recipes from our everyday life on the farm. Read More... 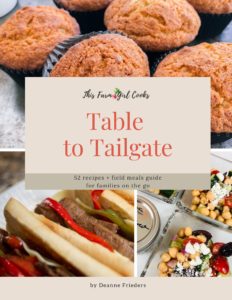